[Case Study] Peek into the UIA Roundtable in Seoul, presenting the ultimate platform for virtual meetings 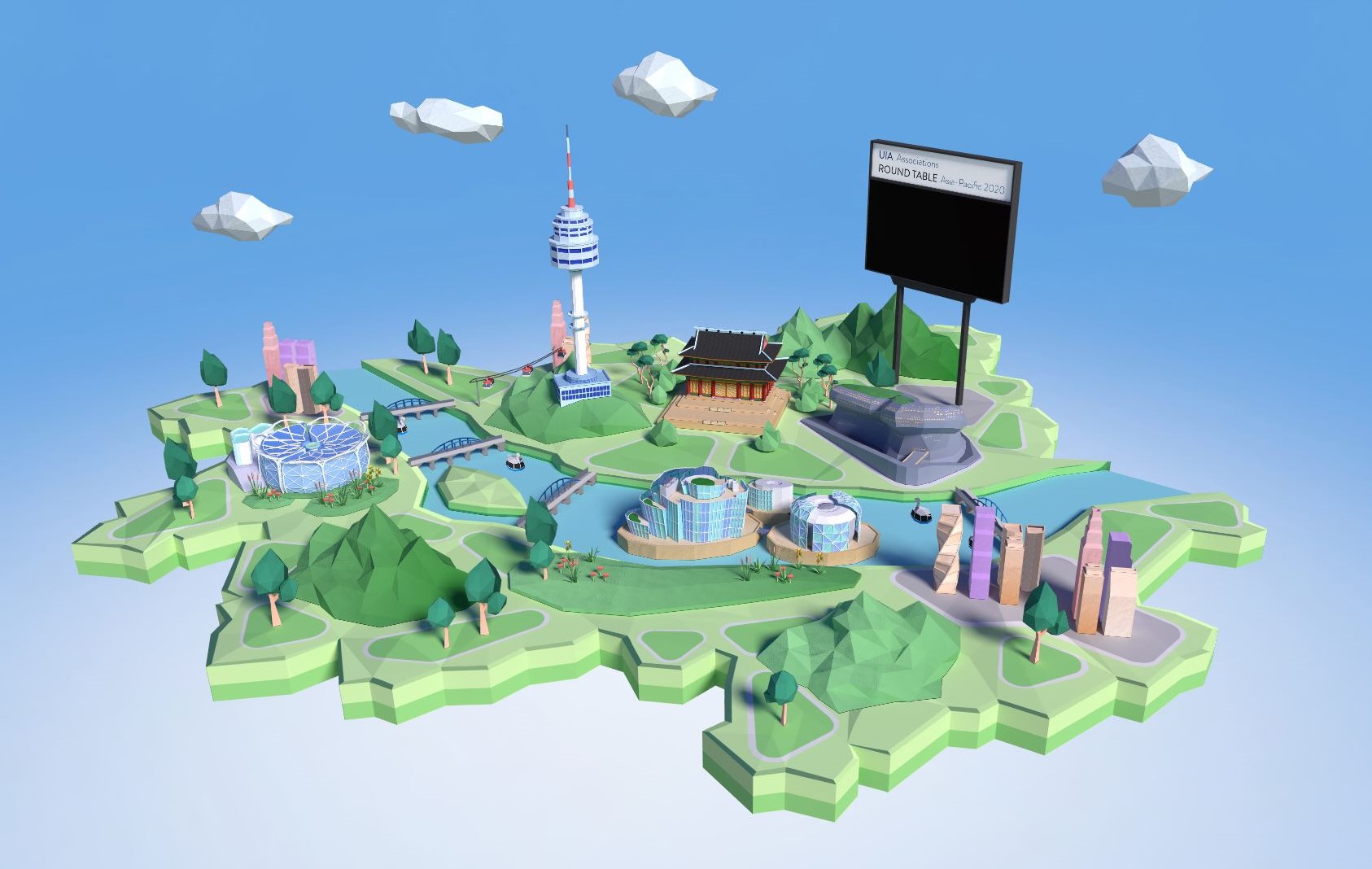 Excellent balance between Planner, IT developer, and PCO to produce the superb end-result in collaboration

On September 17, the 8th UIA Round Table Asia-Pacific 2020 was held in Seoul. Though the roundtable took place in a virtual format, the participants could clearly learn the hosting city, Seoul. There was only a short period of time left when Seoul had some concerns about the success of the event due to the pandemic situation. The arrangement and preparation for the on-site roundtable had already been in places as Seoul was selected as a host city for the roundtable in March of 2019. However, Seoul Tourism Organization (STO) made a pivot and decided to take the event to virtual. Only about 3 months were left to the event but the whole project had to restart from scratch once again. The team at STO was nervous as they were familiar with what was on the meeting agenda. It was a big decision between having an event with the least risk possible by using simple broadcasting system or taking it further to move the whole agenda to virtual and promote Seoul as the best MICE city even in the virtual space. The journey of building a virtual Seoul as a host city and invite the global audience started with half worries and half excitement.

Get ready with 'Virtual Seoul' platform

Though the team at STO were experts organizing events, they needed to study new area of hosting a virtual meeting. Creating a meeting venue in the virtual world where it was practically invisible and intangible was equal to constructing a building from scratch in a short period of time. They started searching for precedents, hoping to at least get some help drawing a blueprint of it.

They looked into the previous events held in Korea, such as BioKorea in May, as well as other online conferences held in other countries. By dividing the categories into hybrid and virtual, they tried to comprehend pros and cons of each category. Most online events were using simple formats- a webinar program format with streaming that broadcast live or recorded videos through Facebook or Youtube. Having a separate website was to provide organized information about speakers, topics and participating companies.

Overseas examples were no different. Participants listened to the lectures in the 3D virtual space while representing themselves as avatars while the most advanced format of the virtual meeting was a social VR format that enabled participants to have a conversation among themselves. However, most of these were conducted by the companies that already had powerful online event platforms, such as VirBELA, a U.S.-based social VR platform developer, Virtway Events in Spain, and Xsoll, an e-commerce platform for video games. They were able to quickly adapt to the new trend by integrating their existing technologies into the events. However, STO noticed that Social VR platforms required users to download ‘the client files' to get an access which can be bothersome to participants. Also, the success of running the program depended on the PC's performance or internet connection so STO concluded that this was not an optimal solution for our case.

As UIA Roundtable was focused on business networking, Seoul needed to find an alternative to bring this to the attendees. It was expected that relatively older group of participants were going to attend simultaneously from various countries and the priority was to provide smooth interactions among the participants and high quality streaming of the presentations. Based on such analysis, STO set the standard that the virtual meeting i) should have easy accessed and be convenient to use, ii) should enable city marketing, and iii) should allow networking and gamification.

In this sense, Web GL(Graphic Library) caught their eyes. It does not allow users to be presented as avatars and have real-time conversations, instead, it shows 360-degree graphic images in a first person point of view and users can access the platform by simply providing URL addresses as it is a web-based system. It can be accessed via mobile or tablet PC, making the platform less influenced by the internet connection or the performance of PCs.

Upon deciding the solution for virtual meetings, the team developed the ideation further and tried to make it a well-prepared virtual MICE event. As selecting IT developer companies was finalized, all relevant parties were designated with their own role for each stage of the event. According to an official from STO, at least three parties needed to be engaged to establish a virtual platform for a MICE event and operate online events: management, 3D graphic design/platform development, and event operation. As a party who was in charge of overall management, STO fulfilled following tasks- to find and select developers, make plans for space and functions within the platform, plan virtual events, promote the event in Korea and globally, produce 360VR videos(16 videos), communicate with hosting institutions.

3D graphic design company AIX LAB created a 3D virtual place of Seoul's famous tourist attractions selected to represent the city on a virtual platform, such as Changdeokgung palace, Seoul Botanic Park, Namsan Seoul Tower, and Dongdaemun Design Plaza. Furthermore, they created a short teaser video and after movies. The graphics designed by AIX LAB were incorporated into the virtual meetings platform program put together by Salin. Conducting trial tests before the event, providing technical support during the event, and crunching the numbers after the event produced vast amount of data for Salin's analysis.

The rising PCO company MW Networks, which had received much attention with its innovative projects, cooperated with the developers and fine-tuned the tasks around the virtual Seoul platform to make it as planned. To be more specific, MW Networks established a registration page and a payment system, managed invitations and registrations of participants, support speakers on recording the speeches, ordered promotional products, prepared rehearsals, managed event operation and analyzed statistics. They proved that PCO's experience and know-how could also play a huge role for the virtual events as well. 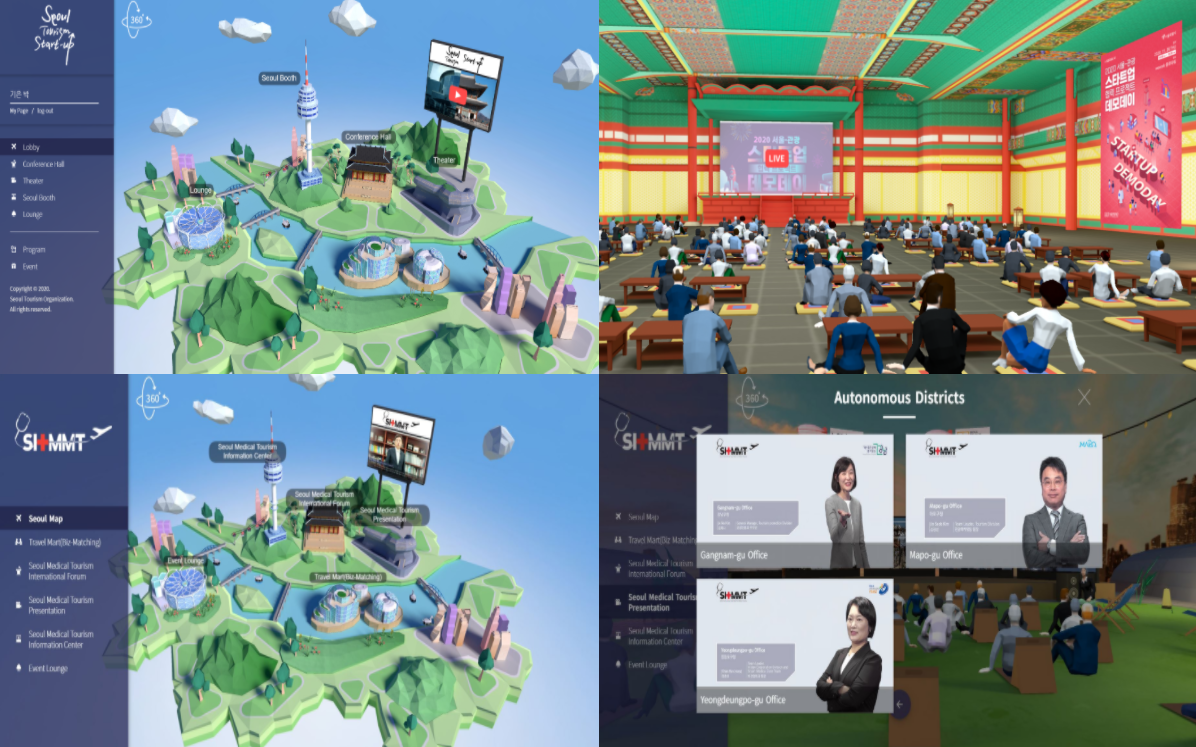 In a cooperative manner, collaborative efforts by all parties involved brought successful hosting of the UIA Roundtable on the Virtual Seoul platform. It showed to the audience across the world that destination marketing is also doable on the online platform, raising hope of 'online MICE' in the tourism and exhibition industries. STO adjusted the Virtual Seoul platform to make it available to be presented on the website for everyone to use. It also released a demo version of the Virtual Seoul, a 3D graphic source, and a utilization guide so that hosts and organizers who intend to have online events can refer to it. The technology and know-how of the Virtual Seoul platform will be utilized for the 2020 Seoul International Travel Mart for Medical Tourism(SITMMT Nov 6~19), Asia Teaching of English as a Foreign Language (Asia TEFL Nov 27~29) and Seoul tourism Startup Demoday (Nov 26).

Kim Ji-hyun, a director of MICE Planning Team at Seoul Convention Bureau, said, “Virtual Seoul was designed as one of the methods to cope with the difficult situation caused by COVID-19. We will have more online events with Virtual Seoul before offline conferences resume again, and continue to promote Seoul as a MICE city by providing more experiences of Seoul to online MICE participants.”