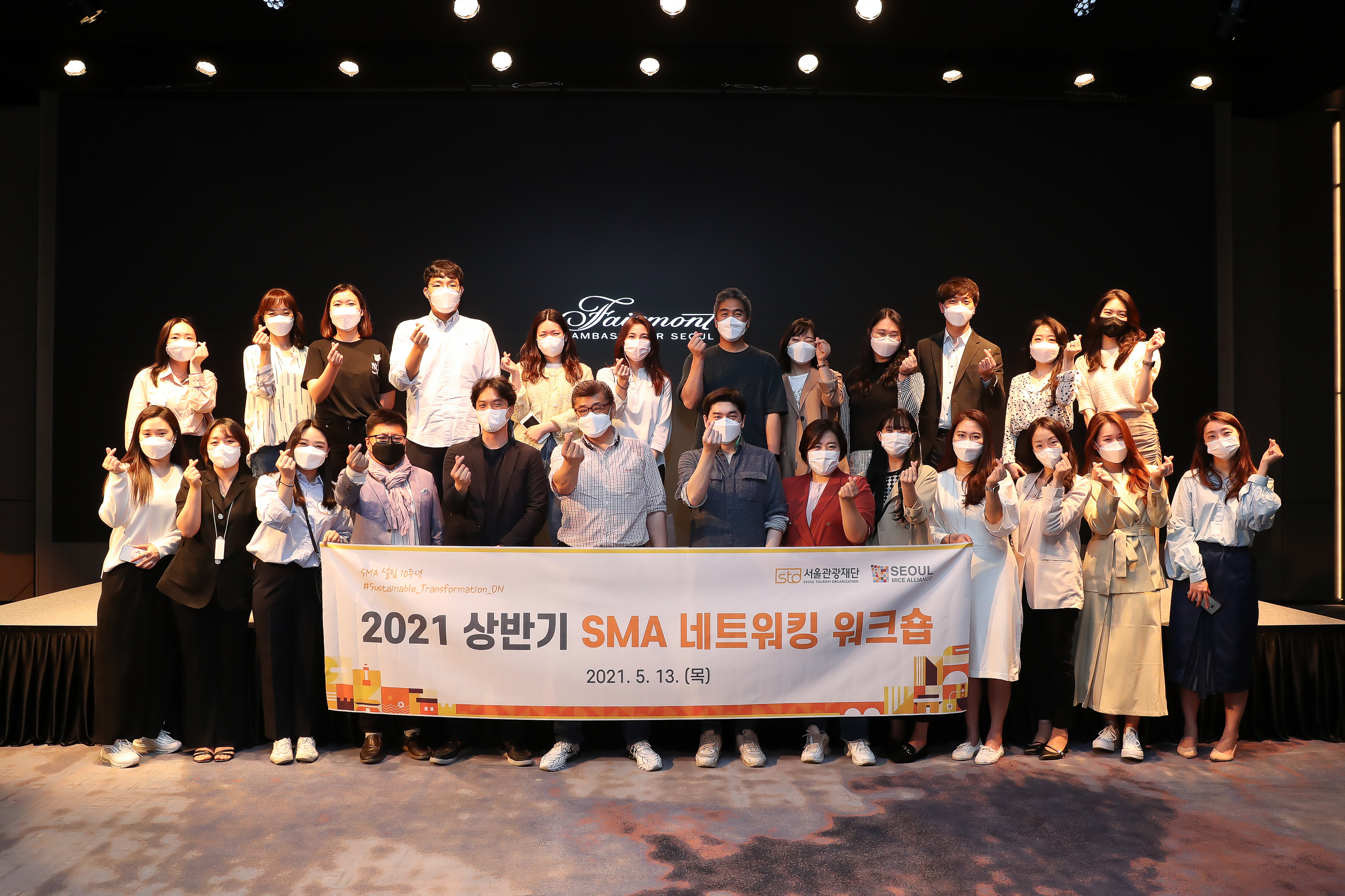 To celebrate the 10th anniversary of the Seoul MICE Alliance(SMA), member employees participated in the 'SMA Networking Workshop' of the first half of 2021 at Seoul Tourism Plaza.

Seoul MICE Alliance(SMA), established in 2011 jointly by the Seoul Tourism Organization (Acting CEO Yong-Tae Joo) and Seoul City as a public-private consultative body to promote the MICE industry, celebrated its 10th anniversary. Started with about 20 hotel, convention center, PCO, and travel agent members, SMA has now grown more than tenfold to have 306 members. Its coverage has also widened to include unique venues, exhibitions, entertainment, transportation, MICE services, shopping, and tourism.

SMA's achievement is more than quantitative growth. SMA played a significant role in promoting Seoul in the overseas market as a host destination for medium and large-sized MICE events and revitalizing the MICE business through the exchange of information and networking among the members. Another area of qualitative growth is its active participation in research projects and policymaking to develop Seoul's MICE industry in the long run.

'SMA Networking Workshop of the First Half of 2021' was held on May 13th to celebrate the 10th anniversary and herald the first step towards the next ten years together. About 40 SMA members participated. For the welcoming and rare face-to-face event, the number of participants was limited under the social distancing guideline, and thorough prior and on-site containment efforts were made.

Employees of SMA member companies visited Seoul Tourism Plaza, which opened in April, to experience one-person broadcasting rooms and online studios. They also took part in group counseling to prevent coronavirus depression and 'Hope Lamp' making, a team-building program. Participants spent their afternoon visiting Fairmont Ambassador Seoul, a new SMA member, to explore the hotel and unique venue facilities. They also made a trip to the newly renovated 'Seoul-ro 7017' to experience 'Travel Pharmacy' and 'Planting Your Own Flowerpot' programs.

A new 'Special MICE Awards' to mark the 10th anniversary was unveiled. 'The Best SMA Member' award will be given to one of the members that attend an SMA event till October. SMA members will vote online to choose 'the Best SMA Member' by themselves. The award is scheduled to be announced at the annual meeting in November.

The tourism and MICE industries of Korea are still going through a recession due to the COVID-19 pandemic. However, SMA members who had set up the MICE industry of Seoul keep up the spirit of challenge and continue their transformation to the digital business model. The examples are successful hosting of international conferences in a hybrid format on an online virtual venue, online booths in the metaverse space, and live-commerce (live online sales broadcast) as part of the exhibition.

Jihyun Kim, MICE Planning Team Leader of the Seoul Tourism Organization, said, "This year's trending topic for Seoul MICE Alliance is 'Sustainable Transformation ON,' in the context of encouraging members to overcome the coronavirus crisis together through the sustainable transformation." She also stressed, "We will take the lead in the proactive transformation of the MICE ecosystem by stepping up the COVID-19 containment service for hybrid events, upgrading the virtual Seoul venue, and developing and supporting the 'new normal' contents.