Hybrid MICE event based on meeting technology increased by COVID-19

As the industry enters the third year of the pandemic, there appears to be a case in point offering stakeholders an opportunity to study how event planners have responded to the crisis. Although the MICE industry suffered a significant downturn in early 2020, it was clear that digital resource utilization was increasing to overcome the difficulties. A thorough search was conducted to find cases where the various implementations of conferencing technology broke through the crisis. There were several cases noticeable in the medical/pharmaceutical industry that providing the latest trends in hybrid MICE events as regular academic events and fairs were held using meeting technology even in the midstof a pandemic. Let’s take a closer look at them.

BIO KOREA, which has been held regularly every year since 2006, has held ‘Bio Korea2020’ entirely online in the effect of the pandemic. At that time, the virtual exhibition led to a lot of participation, such as recording 7 million content views. With such positive response of the previous event, a hybrid format using a virtual platform and an offline exhibition was used in 2021. In addition, the 'Partnering Center' program, which broadcasts the conference site live onlinein real time and connects buyers and sellers through a business forum, and 'BioLive', which introduces its technology and products through on-site presentations or Teams (online platform), were also held. 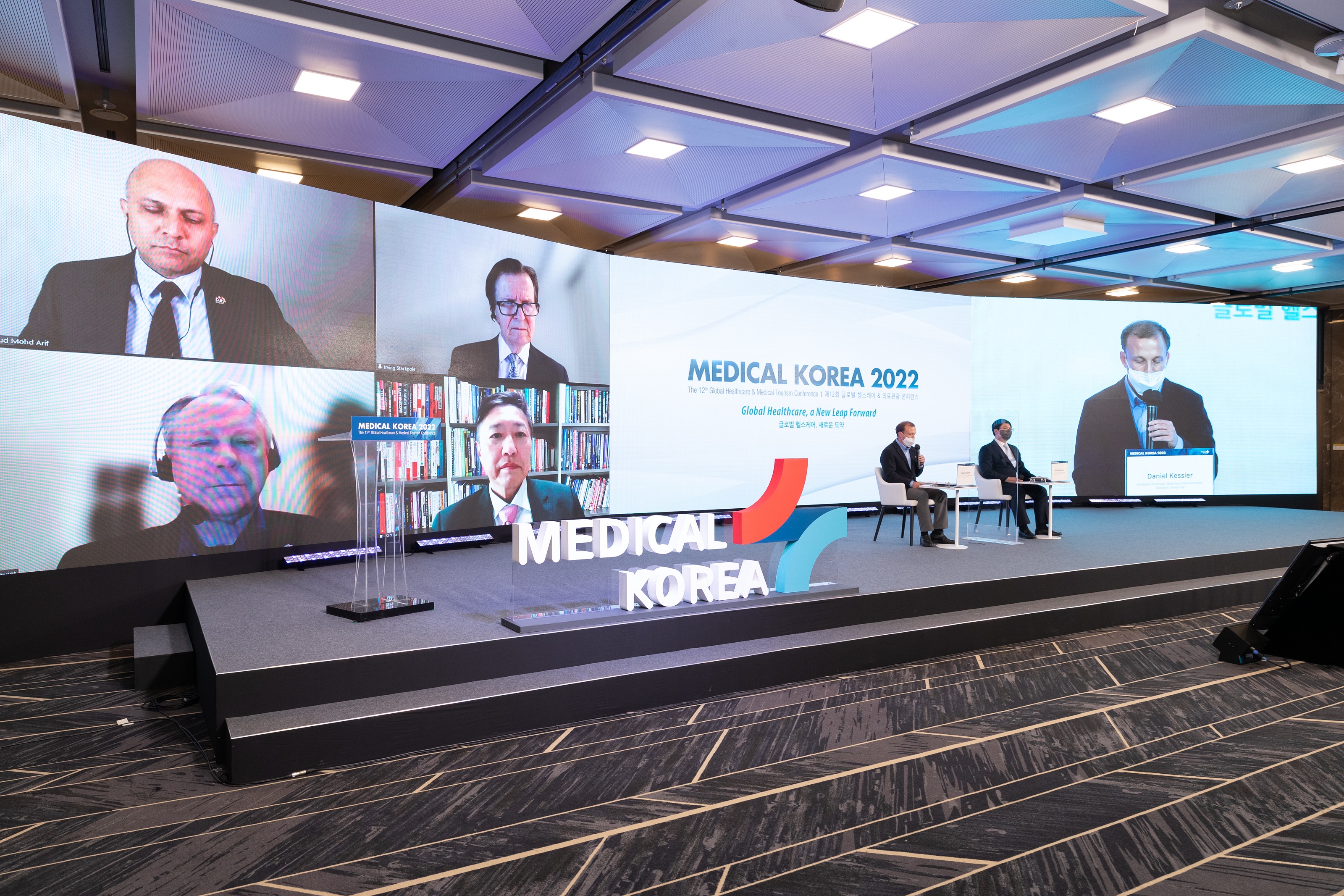 MEDICAL KOREA, which is held annually since 2010, has taken a hybrid format during the pandemic. Medical Korea, which celebrated its 13th anniversary this year, was designed to hold conferences, seminars, and business meetings under the theme of ‘Global Healthcare, a New Leap’ to see changes and trends in the international global healthcare industry at a glance. The offline event was held for two days from March 10 at COEX, and the online event was held for six days through the Medical Korea official website and live streaming on YouTube. The presentations of overseas speakers were broadcasted live through a video conferencing program or pre-recorded videos were played in the viewing room. The ‘Digital Health Care Promotion Center’, where you can directly experience the current development of domestic digital health care, was held only offline from March 10 to 13. It is designed to experience the latest technology in the domestic digital healthcare industry through AR (augmented reality) and VR (virtual reality) experience halls.

The Korean Society of Ultrasound in Medicine (hereinafter referred to as KSUM), which was held at COEX for two days from May 13 last year, also presented a hybrid event format using meeting technology. 'KSUM 2020' was entirely online, but it turned to a hybrid event from 2021. All conferences and seminars that were held offline were broadcast live through an online platform, and e-poster and lecture videos were provided through the online platform. ‘KSUM 2022’, scheduled to be held on May 12 this year, will also be held as a hybrid event.

The Korean Study Group of Hepato-Biliary-Pancreatic Surgery (hereafter HBP Surgery Week), which celebrated its 5th anniversary starting in 2018, also adopted a hybrid format. This event, held at the Conrad Seoul from March 3 to March 5, became a gathering place for academic exchanges through online and offline educational sessions by 874 medical professionals from 33 countries. For online participants, it was possible to access each session through a virtual platform and listen to the educational sessions in progress in real time. In addition, by distributing a mobile application that allows you to easily check the announcements, program schedule, and invited speakers of the 'HBP Surgery Week' event, the accessibility of the event has been increased, and speakers and programs from past events can also be checked through the application, adding to the continuity of the event. The 65th Annual Congress of the Korean Orthopaedic Association 2021 was held at the Swiss Grand Hotel from October 14 to 16 last year. This congress also took the similar format where most of the overseas guest speaker sessions and panel discussions were pre-recorded or live streamed, and a space was dedicated on the website to check the e-poster and virtual video presentation. In addition, information about the overall event such as event schedule, presentation summary, and speaker information can be easily obtained through a mobile application.

△ A view of the Seoul City Hall live lecture hall during the 'Tragenta's For TEN' event held through 'Virtual Seoul 2.0' in March.

VirtualSeoul 2.0, a virtual MICE platform of the Seoul Convention Bureau, is also receiving continuous attention from corporates. On March 30 of last month, the Trajenta's For TEN event was held to celebrate the 10th anniversary of the launch of Trajenta, Boehringer Ingelheim’s representative drug, in Korea. Live lectures were delivered at the screen of Seoul City Hall Plaza in real time and the DDP rooftop area was assigned to have pre-recorded videos of the speakers. Inaddition, the booth celebrating the 10th anniversary was set up at the N Seoul Tower to play a video clip of the history of the drug Trajenta and brochures about the effects and usage were placed on the stand. Various events such as the 14th Global Symposium on Millimeter-Waves & Terahertz and the 15th Asian Congress on Oral & Maxillofacial Surgery (ACOMS 2022) are booked to be held in a hybrid format through the Virtual Seoul 2.0 platform in coming May.